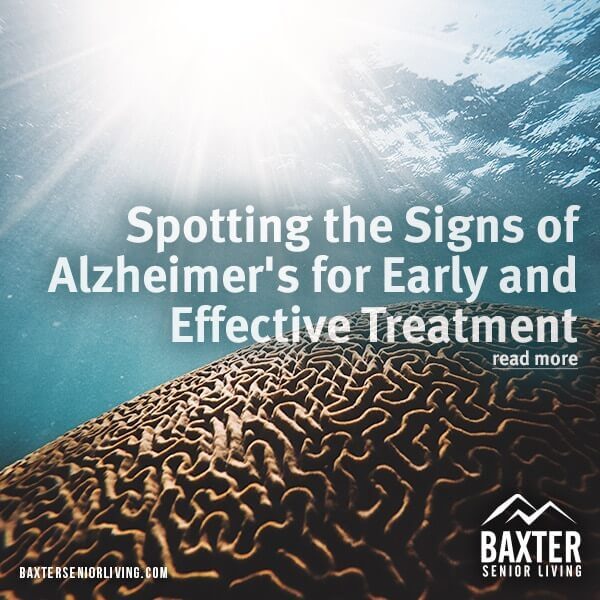 It’s entirely normal for age to take its toll on mental sharpness. Most people become a little more forgetful or a little less attentive as they enter their golden years.

However, sometimes things take a far more serious turn. Approximately one in 10 people aged 65 and over will develop Alzheimer’s, the most common form of dementia. The total number of sufferers will only increase as average life expectancy lengthens.

Sadly, for now, there’s no cure for the disease. But early detection and treatment are hugely useful in mitigating the symptoms and prolonging a higher quality of life. What are the signs to look for if you suspect a parent or other loved one may be having difficulties?

Struggling to remember names or facts, only to remember them later, is an entirely normal part of aging. However, with Alzheimer’s this forgetfulness will show clear signs of increasing in frequency, with recall becoming more difficult and less reliable.

In the early stages of Alzheimer’s, it often becomes more challenging to follow structured plans. Having trouble cooking from a recipe, or balancing a month’s finances, is a clear indication that concentrating on a project is becoming an issue.

Another potential warning sign is forgetting how to complete everyday tasks which were once second nature. For example, someone in the early stage of Alzheimer’s could be newly confused by a microwave oven, or stumble over the rules of a well-loved card game.

Alzheimer’s also frequently impacts awareness of time. A sufferer may become confused about what day it is, or what time of year. They may lose track of important dates and have difficulty thinking about and planning for the future.

Even allowing for eyesight problems in later years, Alzheimer’s can reduce visual perception. That can show itself in impaired spatial awareness, such as a difficulty in judging distances. It can also lead to problems with recognizing visual patterns, often making reading difficult.

It’s exceedingly common for dementia to affect communication ability. Sufferers often struggle to find the right words when speaking or writing and may use inappropriate words or unexpected bad language. It may become increasingly difficult for them to keep track of a conversation and focus on a topic.

Everyone misplaces glasses, keys, and other personal items from time to time. With age, this is likely to become much more common. However, Alzheimer’s often limits the ability to search for lost items methodically or causes the sufferer to repeatedly forget where to find a particular object.

One strong early sign of dementia is that the sufferer is aware of these changes, and becomes confused and frustrated rather than just mildly annoyed.

A lessening awareness of self often causes a deterioration in personal hygiene and care. Washing, grooming, and changing clothes may become more haphazard.

Even in its early stages, Alzheimer’s can affect people on a profound emotional level, noticeably changing their personality. Mood swings and unexpected reactions are common. It’s not unusual for sufferers to grow more fearful and distrustful, and to become easily upset when things aren’t going as expected or when their immediate desires are frustrated.

As these personality changes deepen, the confusion they cause can make it exhausting to function in company. Sufferers may start to withdraw socially, either consciously or unconsciously. That is especially common in the early stages when sufferers are still quite aware of the changes they’re undergoing.

It’s important to remember that none of these symptoms are an immediate cause for concern on their own. All of them are completely normal effects of growing older.

However, if several of these signs appear together, and if they seem to be growing in intensity, it may be prudent to speak to a doctor. The earlier Alzheimer’s or other dementia gets diagnosed, the more effective the treatment can be, and the longer a high quality of life can be preserved.

Baxter Senior Living is a Senior Housing Community that will be located in Anchorage, Alaska off of Baxter Road. If you are seeking Anchorage Senior Housing, or Assisted Living Facilities in Alaska please contact us today to make your reservations. (907) 891-9696 or fill out our contact form and we will be in touch! contact us

Baxter Senior Living is now accepting reservations for our opening in 2019. Reserve your spot early to ensure you get into the unit you want! We offer a no-risk, refundable deposit. Sign up today and we will be happy to answer any questions you may have.